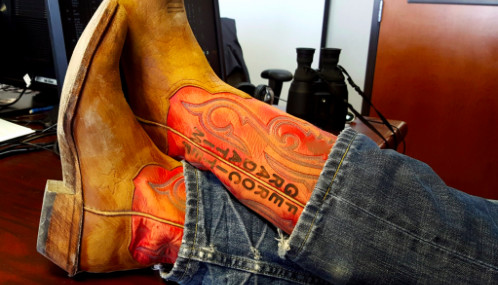 Bezos is equally home thinking about the long-term and also the grind of experimentation and customer focus that happens in the crushing present.

I just spent five days with Amazon. The experience completely rocked my world and gave me the clearest view of the future that I’ve ever had in one place at one time.

After the infamous article in The New York Times, James Jorasch and I spent the weekend writing this. Amazon saw it and invited me out to give two keynotes to many of the company’s top tech leaders. James and I gave the talks together, and had a great time. In between, for days, we spent a lot of time with them. The concentration of brilliance and passion at both sessions was phenomenal.

Our initial take on Amazon’s culture was accurate, but this experience took our understanding to a completely new level. My brain was on fire after a few days. Still, I wanted more.

Also, I wanted s’mores, more and more s’mores, and I probably ate about a dozen of them. There was something so simultaneously ancient and modern about sitting together around a campfire night after night roasting marshmallows on sticks under the Milky Way while talking about the combination of scale and inventiveness, which is deeply appealing to people who want to see their best ideas go to market, and those who want to create the future.

I strongly recommend reading Brad Stone’s book, The Everything Store: Jeff Bezos and the Age of Amazon. Bezos operates within multiple time dimensions at once. He is equally at home in both the long term, which requires a nearly unthinkable degree of vision and patience, and the constant, relentless grind of experimentation and customer focus that happens in the crushing present.

Jeff Bezos’ other ventures include The Washington Post, where Margaret Sullivan (after a great run at The New York Times) is now a media columnist who reacted to the publication’s credentials being revoked by Trump here, and Blue Origin, which safely landed the New Shepherd rocket for a fourth time just today. Gradatim ferociter, Jeff Bezos. As a customer, a futurist, and a human being in the same solar system (for now), I thank you and the many dedicated people around you for what you have created and continue to create with your imagination and hard work.