See and Manage Your Organization's Culture 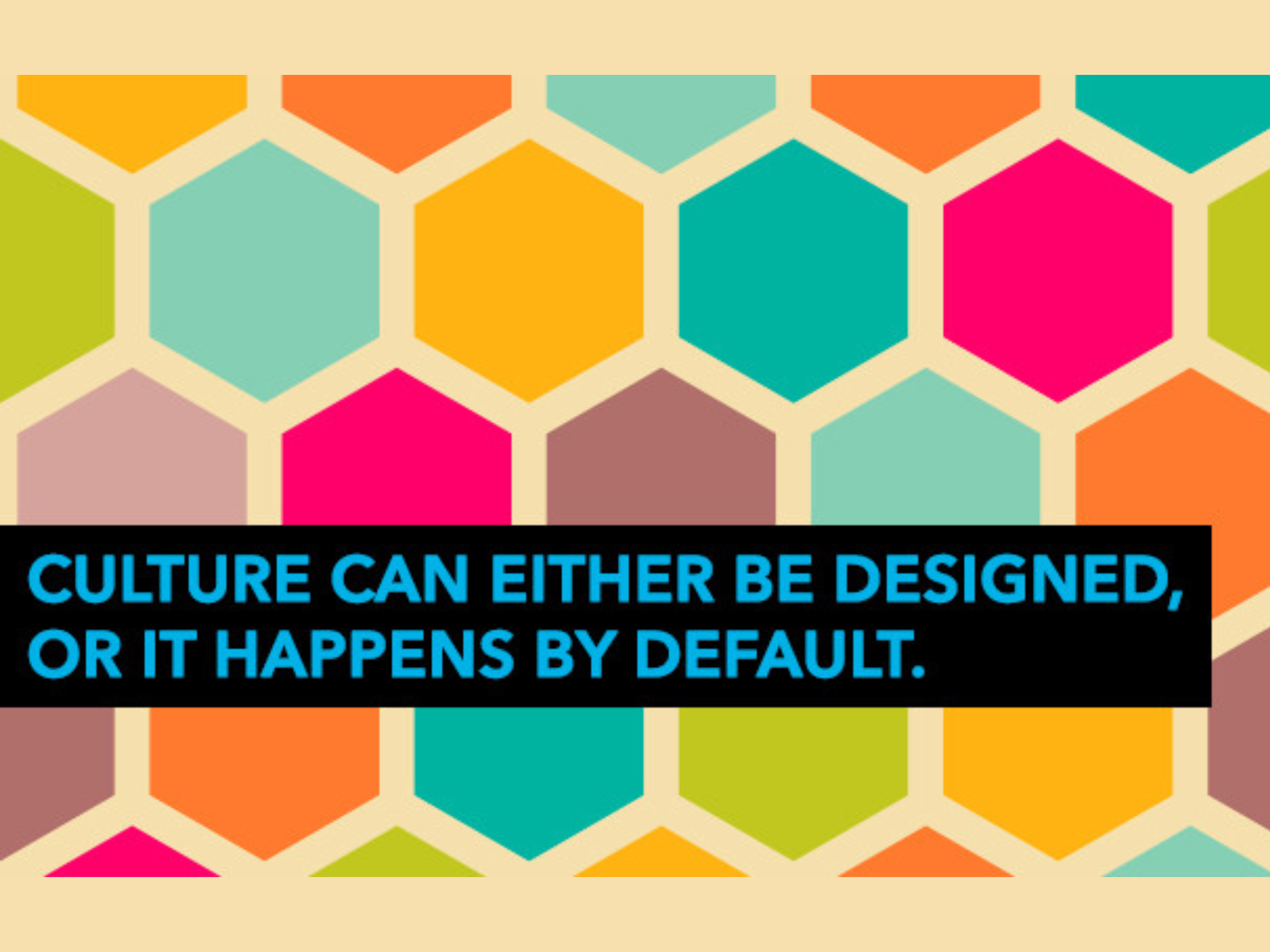 Culture Map is like GPS for your organization's culture. Know where you are and where need to go.

Organizational culture is the heart and soul of a company. Yet leaders often perceive culture as a nebulous collection of intangible concepts, seemingly impossible to measure and quantify and therefore relegated to the “soft skills” category. Culture belongs in the realm of fine arts and museums, right? It’s the job of diplomats and activists, right? Wrong. Every time a group of people interact, culture develops. From corporate organizations to chess clubs to families, patterns of culture inevitably emerge.

Here’s the thing many people don’t realize: culture can either be designed, or it happens by default. Great leaders understand the value of culture, but the path to designing it is often extremely difficult to see, much less manage.

I’m thrilled to announce that Science House s now the exclusive US partner on the implementation of Culture Map, a tool created by Dr. Simon Sagmeister that allows us to work with clients to make the culture of their organizations visible, tangible and measurable.

Some employees use the word “politics” to describe what happens when an organization’s culture forces people to navigate in the absence of clear, collective values. Others are far more candid in describing the often ugly reality of what happens when culture is treated like an invisible ghost that sometimes scares people by rattling its chains.

In the seven years since creating the Imagination Age framework for collaboration, I’ve worked with many organizations around the world to transform organizational culture. I created the Imagination Age because the industrial era is fading but not yet gone, and the intelligence era is coming but not yet here. In between, individuals and organizations are getting crushed by the need to constantly change. This problem intrigues me, particularly as we are now increasingly collaborating with software and algorithms to take our own intelligence to a new level and design new systems. I thought it would be helpful to think of this period in between as an era of its own so we could work together to create the mindset necessary to shape strategies for the future instead of just trying to cope with the need for constant change.

The Great Challenge of the Imagination Age

At the beginning of the Imagination Age, I spent four years traveling around the world to understand how different cultures interact within and between themselves during times of crisis and transformation. I worked amid natural disasters, human conflicts and crises during this time, with large multinational corporations, think-tanks, governments, universities, not-for-profits, school districts, startups and organizations of all kinds, even families, to understand the ways in which different types of organizations are structured.

Three years ago, I started collaborating with inventor, investor and entrepreneur James Jorasch to take the Imagination Age to the next level at Science House. We work at the intersection of humanity and technology, specializing in collaboration strategies between the two as companies expand their collaborative networks to include vendors, clients and customers. The most critical business skills in the Imagination Age are the ability to solve problems and spot business opportunities. In order to do either of these things well, collaborative groups need to have the kind of culture that fosters forward motion and deep understanding.

Culture is a very tough issue. As the dust settles on yet another reorganization, the hard reality of transformation begins to creep in. Is it working? Was this massive effort was worth the time and effort? I knew I needed a way to make the story of culture visible, and I’ve been looking for one for years. I’ve met with lots of people who have come up with measurement systems, but the problem is that no matter how clever or effective, these systems are still generally just a bunch of words and numbers on a page.

That all changed when Dr. Simon Sagmeister showed up at Science House with his Culture Map. As soon as he spread out the visual components of his system on the gray chesterfield sofa in the Celestial Salon, I texted James, who was upstairs in his office: Please come down immediately.

Within minutes we were in the Imagination Room at Science House and Simon was sharing details of his system.

Remember what it was like to drive before GPS? Holding a paper map on the steering wheel, cursing under your breath as you missed a turn, knowing that you were going to be late or maybe even hit a deer or an ice patch on an unfamiliar country road? Imagine what it must have been like for captains and sailors on ships during a storm before latitude and longitude could be determined and matched with a location on a map. When I saw the Culture Map™, I felt like I did the first time my GPS warned me that a turn was coming up.

Culture Map is that simple, effective and powerful.

For a bit of background, Simon is the nephew of my friend Stefan Sagmeister, a renowned designer who has a great habit of taking creative sabbaticals. This habit inspired the next generation of his family, and it was during such a creative period that Simon took his Culture Map tool, initially conceived during his PhD dissertation process, to the next level.

The first image Simon showed us was an iceberg, with the visible tip representing all the tangible aspects of organizational culture (like the dress code, org charts and office layout), and the part underneath hiding all the intangible things (like morale, how people interact and feel). The Culture Map is a color-coded system situated below the surface to make those previously invisible components tangible and measurable. All organizations have seven components, to various degrees, and sometimes there’s a requirement for a heavy concentration in one area or another. In other cases, however, an organization can make a conscious decision to grow or shrink one of the areas through specific actions.

The Colors of Culture

Simon began to explain the meanings behind the colors:

Purple organizations are like sports teams, with a strong leader who lays down the law and everybody else listens and takes action. Such groups have strong rituals and mascots. Red organizations aren’t afraid of conflict. They move quickly and aggressively without stopping to overthink the consequences. Blue represents order, regulation and rules. Orange represents an entrepreneurial group, focused on finding new opportunities and beating the competition. Green means harmony, the human skills and empathy. Yellow symbolizes analytics, reason, knowledge and logic. Aqua is the realm of systems thinking.

Academic organizations tend to be yellow and aqua, but what if they don’t have enough blue to organize or red to push new ideas through? Investment banks tend to be very orange and red, focused on wins and opportunity, but the wake of regulatory compliance is requiring them to be more blue and even more aqua as they try to understand how to balance their focus on profit with the greater good.

Nothing Soft about People Skills

People and teams should be rewarded for their contributions in different ways. A green team values group harmony, so singling someone out for recognition, a better parking spot, for example, might disrupt team harmony. Sending a green team out for a fun bonding lunch is a better solution. A purple team goes wild when the leader publicly praises their efforts. Every person has a different color profile, and a different way of perceiving and celebrating success. We work with leadership teams to tailor performance and behavior rewards that are meaningful to recipients.

Moving Toward the Future Now

Once a current snapshot of your group’s culture is established, we work with you to create a future map that reflects the needs of the group and goals of the organization. Maybe your organization is too blue, riddled with legacy systems and bureaucracy, and you want to see the organization become more orange, more entrepreneurial, competitive and looking for opportunities. The next step is to brainstorm the action items that will be taken to move from the current map to the future one. This is where you can start measuring results immediately, with your entire team and organization understanding what the orange (or purple, or red, etc) goals and behaviors are that will get you there and how to motivate people along the way.

While the Culture Map system aligns with the way we already conduct our work, it also brings a level of simplicity, clarity and visual impact that will usher in a new, smarter era of the Imagination Age. Culture Map even has a color for that. Welcome to the future!