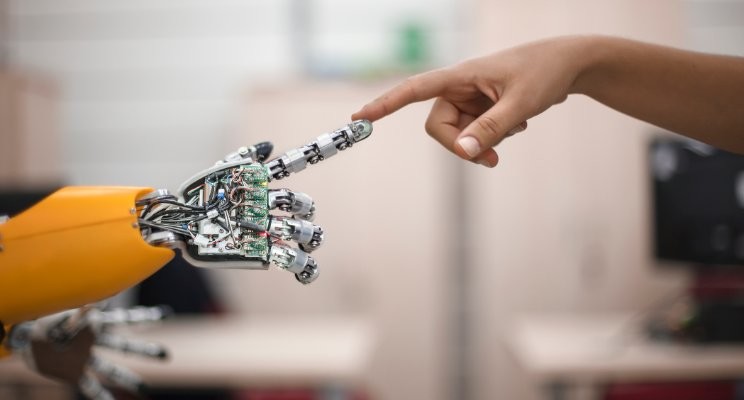 To go fast, companies need rethink their cultures. Trying to "do agile" without fixing your culture will just slow you down.

The need for speed isn't just an inconvenience imposed by an increasingly fast-paced world. It's much bigger than that, and leaders need to evolve much faster to keep up.

The struggle to reinvent juggernauts is real. We work with many of them aWhile many orgs are struggling to make sense of managing technical debt, they are already starting to accumulate a new problem: machine learning debt.

“Doing” Agile Is Not Enough

In HBR's How To Make Agile Work for the C-Suite, the authors point out that "many companies are attempting a radical — and often rapid — shift from hierarchical structures to more agile environments, in order to operate at the speed required by today’s competitive marketplace."

New companies aren't tangled up in densely interconnected old code that keeps legacy companies operating, so they are able to grab market share in a way that “nobody could have predicted.” But it is predictable.

Agile is an iterative, incremental approach to time-boxed software development. Many companies are attempting to be strict literalists about their adoption of this methodology, but they are actually just cherry-picking pieces and trying to shoehorn them into existing cultural habits without mindfully designing how, when and why they execute.

The problem is, the people adopting this new culture are accustomed to hierarchical org structures and years of waterfall development, in which software is developed over time, according to milestones, budgets and resource plans that often get blown by a combination of reality and unpredictable complexity. The reality of a workforce with a muscle memory for “the way we do things” is that two days of agile training is not enough. Coaching, not just on agile but on culture, is required as teams develop a full working understanding of the new cultural requirements demanded by the new reality.

I've worked as an advisor to executive leaders dealing with people and technology across many industries for over a decade. My career as an ethnographer started in the 1990's, when I realized that the digital culture was going to change the way people interact in the real world. Long before the iPhone was released, my articles about the impacts of digital culture were being taught at universities from coast to coast, which launched my career as a journalist, an ethnographer and a leadership advisor.

The two biggest cultural issues I perceive in general are lack of imagination and lack of deep intellectual rigor. Increasingly, imagination is being acknowledged as one of the critical skills for people who want to be employed in the future. Deep intellectual rigor requires time to think, but most people are so busy dealing with outdated systems and cultural norms that they don’t have time to think, and even if they did, no one person perceives themselves as wholly responsible for making decisions about outdated end-to-end processes and systems that are eating up everyone’s time.

While speed and intellectual rigor might seem incompatible, the HBR article points out how one company, Amazon, manages this inherent contradiction:

No company demonstrates this intense focus on speed better than Amazon, which puts these concepts into practice every day. Amazon makes extensive use of well-researched white papers to help focus the management team on critical decisions. At the outset of a meeting, individuals are given time to read the white papers in silence before thoroughly discussing the merits of a proposal. Not all decisions are treated equally. In the words of CEO Jeff Bezos, “Many decisions are reversible, two-way doors. Those decisions can use a light-weight process. For those, so what if you’re wrong?”

When I was invited last summer to deliver keynotes on one of Amazon’s leadership principles, Think Big, for many of Amazon’s top leaders, they asked me to push them even harder. I spent a week with them, and during this time my brain buzzed constantly, pushing harder and harder, instead of trying to find ways to make my ideas more comfortable for people. It takes more energy to make challenging ideas more palatable than it does to deliver them candidly and advise leaders on pragmatic ways they can adjust. Ideas about the way things should be cling stubbornly, preventing imagination from truly flourishing.

Science House invented a product called Sense and Adapt to help organizations measure and react to the reality of projects and teams in real time. It is refreshing to see the distance collapse between the people doing the work and the leaders who are courageous enough to solicit and act on the actual truth instead of wishful thinking. Agile is a way of thinking and being. It is not just a software methodology.

The future is already happening. Companies dealing with how to handle technical debt are going to be reeling from the next wave.

This week, Elon Musk freaked people out by calling for regulations on AI “before robots start killing people.” This isn’t the first time Elon Musk (who is actively looking to merge our brains with AI) has sounded the alarm (I responded to him here). We already have countless robots on the battlefield, so there’s nothing futuristic about that (I interviewed PW Singer years ago about his excellent book, WIRED FOR WAR).

William Gibson once said the future is here, it just isn’t very evenly distributed. The same will be true of the singularity, which will happen invisibly every time a process is optimized, and a neural net gets smarter than our imaginations currently allow us to perceive is possible. Facebook bots recently created their own language.

In the short term, the value for companies is vast. GE is creating an AI workforce, documented in this excellent MIT Technology Review article:

“The technology depends on artificial intelligence to continually update itself. What’s more, if data is corrupted or missing, the company fills in the gaps with the aid of machine learning, a type of AI that lets computers learn without being explicitly programmed,” says Colin Parris, GE Global Research’s vice president for software research.

Parris says GE pairs computer vision with deep learning, a type of AI particularly adept at recognizing patterns, and reinforcement learning, another recent advance in AI that enables machines to optimize operations, to enable cameras to find minute cracks on metal turbine blades even when they are dirty and dusty.

Colin Parris was the head of the group that hired me at IBM a decade ago to study the business value of the company’s emerging use of digital technology within the culture. The first time our avatars met, I had no idea where his body was located in the physical world.

So here we are in 2017, and even people like Google DeepMind's Demis Hassabis who are closest to the creation of machine intelligence and neural nets can't really predict what's coming:

"Any time a major new technology comes in it creates a big change. We've known that from the industrial revolution, the internet did that, mobile did that. So you could view it [AI] as another really big disruption event in that lineage. That's one reasonable view. In which case, society will just adapt like it's done with all the other things and some jobs will go, but newer, hopefully better, higher quality jobs will become possible, facilitated by those new technologies. I think that's definitely going to happen in the shorter term.

The question is then is this kind of a one time epochal event that's beyond the level of even those big things. I'm not sure. I think you could argue that it might be. Then the question then becomes more profound. If you've got all this increased productivity, you need to make sure that's distributed fairly but I think that's more of a political issue than a technical one.

Then the question comes if you've managed to do that, you as a society, then the next question is about things like purpose and those kind of higher level questions, which I think are very interesting things to think about. We need to do more research."

As a futurist, I’m also a historian. We can do research about what’s going to happen in the future, but we can also learn from the past. When people feel that their lives lack purpose, they find their own ways to fill in the void. The concept of universal income sounds great on paper, but the math doesn’t look so great and the concept is divisive. Yes, the revolution in machine intelligence will create new jobs, but not for the people who have been replaced, and many of those new jobs will be quickly outdated as intelligence continues to get smarter than we can imagine.

Most of the creators of machine intelligence agree that it is going to be extremely valuable in the near future for the companies that get it right, and that at some point in the future that will likely happen much faster than even the most conservative estimates, a watershed moment is likely to occur, tipping us past the point of turning back. The only true agility at this strange and precarious moment in human history rests in the combination of imagination and innovation. At Science House we believe that imagination without innovation is philosophy, and innovation without imagination is directionless.

(Disclosure: GE and Google are both Science House clients but not in relation to either of the projects mentioned in this post).