Get the Right People in the Room 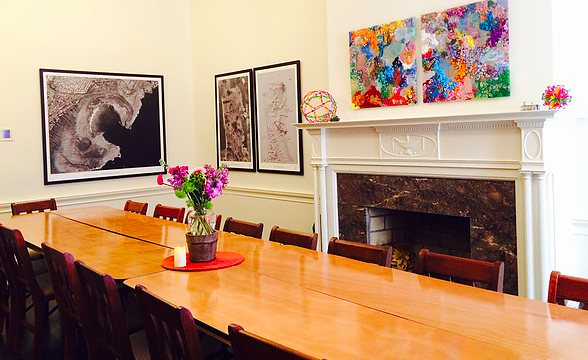 In the beginning, the headquarters for Manhattan was designed to host events for teams to come and think through complex issues together. We called it a cathedral of imagination, and we worked hard to make sure every inch of the seven-story townhouse was optimized for creative focus. Then reality set in, and brought us to a new mission. What happened?

It always started the same way. Someone would get in touch, asking us to facilitate a meeting. We would tell them that the rooms are designed for small groups.

But it was a problem. If Mary was invited, Bill had to come too. If Bill was there, he wouldn't show up without two other people he needed to invite, just in case. So-and-so's assistant had to come too, and sit with a laptop in the back of the room, and once news got out that he would be there, two others felt that they should be there too, forming a little army of extra observers who seemed to serve no real purpose and tap tap tapped away on their keyboards or scrolled through their phones.

The rest of the group, in each case, was supposed to be tackling serious problems, including existential threats that we have since seen come to come bear quite publicly for many of these large companies. It was evident, as teams stood at the walls of our Imagination Room at Science House, that they were not solving problems. They were talking. A lot. One time a senior executive at a global company stood up and said to his colleagues, "Do you not understand that we are standing here with a ball shackled to our ankles while an extinction event is headed our way like an asteroid?"

We saw an opportunity in this, because it happened so frequently across so many industries. Science House founder James Jorasch is an inventor (named on over 750 patents, including the patents at the core of Priceline and many other well known companies across industries) and I'm a futurist focused on applied imagination as a problem-solving technique. We decided to stop wasting our time facilitating meetings that weren't going anywhere, and fix meetings instead.

We spent a couple of years deconstructing meetings at every level, grouping them, creating taxonomies of intent, measuring the gap between the intended purpose and the outcome, and so on. We measured every aspect of meetings, simple things from the number of participants to the duration, to far more complex and nuanced dynamics.

All the while, we did research on existing meeting systems only to find there's not much, and it's all the same, more or less. Instead of meeting for an hour, try fifty minutes. That sounds great, since it gives people a chance to actually get to the meeting instead of calling in and multitasking, pretending to have been on mute when they hear their name. But if you don't know what the purpose of the meeting is, you can meet for fifteen minutes or three days, and you won't get any closer to a solution. Some companies are better at it than others. Amazon executives famously won't even step into the room unless they've been given a six-page document outlining the business value of investing their time.

More importantly, we realized that most meetings feel the same. This is a massive problem, and effectively blocks progress and slows velocity to a crawl. Once we identified the meeting types, we identified the behaviors that support the success of each type. Model Meetings is our framework that teaches this skill. Last year, we worked on three enterprise wide rollouts (two Fortune 100 companies and a publicly traded company) as well as pilots with a number of other large companies. We learned a lot, and I'll be writing about it more this year as we continue to grow the practice. If you're interested in learning more, contact me.

And here's one secret: Model Meetings does save millions in large companies that apply it well, and it brings energizing focus, clarity and purpose. But it's not just about meetings. After spending years working with so many companies on understanding their culture, we understood that the desire to be more innovative, which brought them to Science House to begin with, was far outpacing reality. This system trains individuals, teams and functional areas to become a more entrepreneurial workforce.

Have You Ever Tried...Just Listening?

Do You Spend Time at Work on Autopilot?

Tired of People Wasting Your Time?