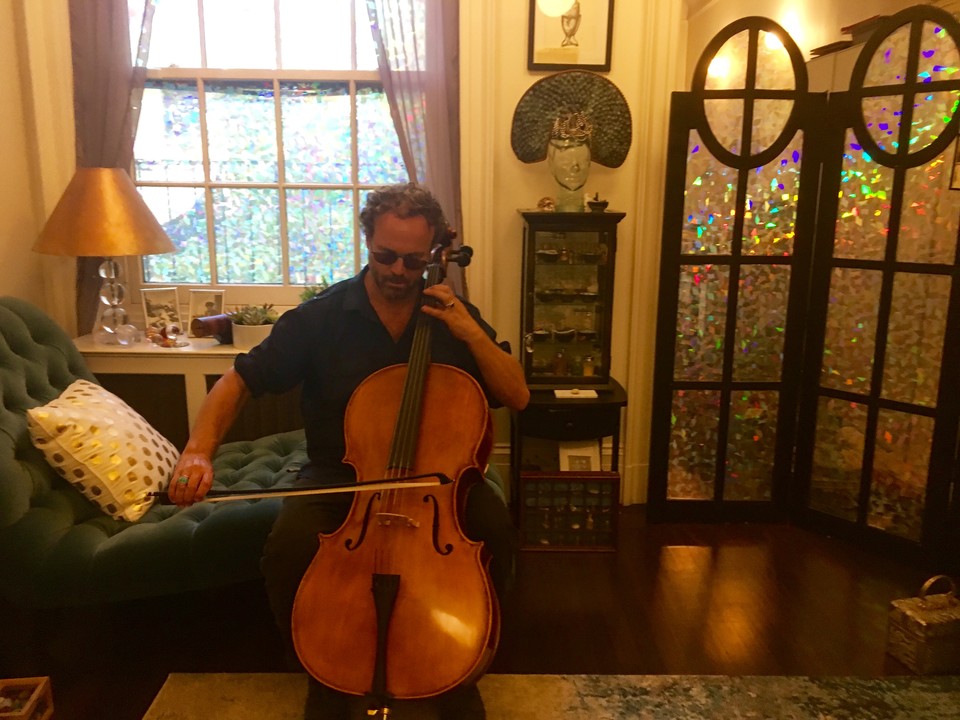 Learning from a cello lesson: when it comes to technology, we are as much artists as engineers.

During my cello lesson with Michael Fitzpatrick today, I realized that his performances offer a glimpse into an important aspect of our relationship with technology.

I’m a beginner, so he’s teaching me how to hold the bow, to arch my hand into maximum interior “cosmic space,” as he calls it, and turn my thumb into an omnidirectional machine and turn it into the support that opens and closes the drawbridge of my hand.

“Right now,” he said, “you just have to focus on motion, not power. You are learning how to create a relational sonic universe. You come at it from an elegant angle, like Michelangelo with his chisels, to free the sound the way he freed figures from the block.”

Michael and I met over a decade ago, in a medieval Spanish castle, when he was invited to perform at a conference at which I was a speaker. I was overwhelmed by the raw emotional power of the sound, not just because the music was beautiful, but because I got the impression that somehow, Michael was channeling the energy of the people in the room.

I’m not the only one who feels this way.

“The emotion induced by Michael Fitzpatrick’s music is so powerful it seems almost verbalized,” said His Holiness the Dalai Lama.

“A visionary work of extraordinary creative imagination, designed to uplift humanity into its higher nature on Earth.” Robert Snyder, who won an Academy Award for his film TITAN: Story of Michelangelo.

Michael told me a story about two cellists today, titans who were diametrically opposed to one another philosophically.

“And they were both absolutists,” he said.

For the sake of this context, I will call the two cellists Cello A and Cello B.

Cello A was brilliant and on the ascent when technology came along to change the way classical music was recorded. He got an idea, to put a microphone on the cello while he performed, which enabled him to economize all of his energy and create a sleek sound with less effort. He let the microphone do the job for him, Michael said.

“These were living gods,” he said. “Their fates unfolded along different lines.”

Cello A, Michael said, never understood the magic trick that Michael had just taught me: how to conjure the cosmic real estate within the universe of my arched hand. He was a mechanical genius, but he was also a reductionist, too smooth, reliant more on the laws of physics than his own soul to produce sound. The system he created “poisoned the minds of thousands of students.”

It was this comment that made me see the cello for what it is: a marvel of art, math, science and engineering that produces beauty in the hands of someone who has taken the time, many years and countless hours of practice, to collaborate with it.

Michael was raised in the lineage of Cello A as a young player, but twists of fate brought him into the sphere of Cello A’s arch-rival, Cello B.

“He’s on the other side of the cello galaxy,” Michael said. “Also a genius, but with the angle of advantage. Relational.”

Earlier in the lesson Michael taught me how to tune the strings by ear, to see if the A string sounded right with the D. It is a relationship between the two, he said, not one in isolation. A tuning app could tell us whether my ear was right, but Michael wanted me to see how they felt together, to harmonize the sound until it came to life.

Cello B, he said, taught him to constantly adjust. At every moment, a new dynamic takes shape. New energy manifests. Something happens, something changes.

“Adjust in real time,” he said. “In unreal time. In surreal time. You want to set your vanishing point so far out that you never run out of room to expand. This is the laboratory. Learn in it. Dream in it.”

Our lives with machines are full of titans, some of whom are like Cello A, and some of whom are like Cello B. This is why I prefer to call AI applied imagination, rather than artificial intelligence. We are in it now, collaborating with the instruments we create, watching them take on a life of their own in our hands. We can be mechanical about it, and sometimes we need to be, to become more efficient, more precise, more economical.

But let’s not forget, as we continue to explore the Imagination Age, between the Industrial Era and the Intelligence Era, that as much as we are scientists and engineers, we are also artists. Without us, the machines are silent, though if we listen very carefully, they have a pulse of their own, and it’s getting stronger.