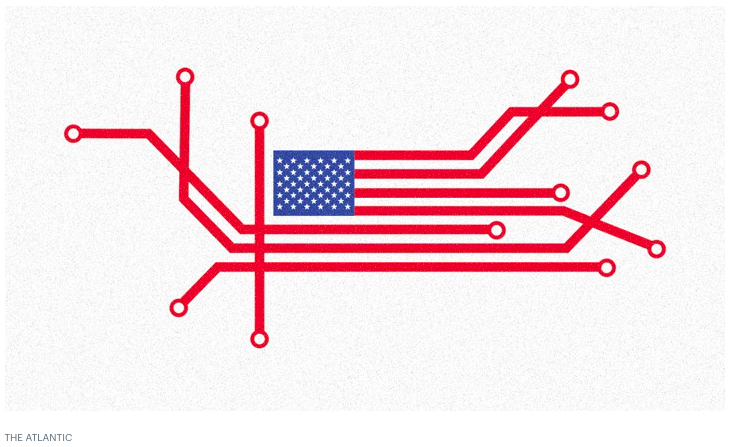 Are the tech giants the new American empire? If we're all being watched, are we also watching? This piece in The Atlantic poses the idea: What is the internet if not a modern panopticon? But it is a two-sided one, a panopticon that can be turned around.

I've always been interested in panopticons because my great-grandmother was born and raised on Ventotene, a volcanic island in the Tyrrhenian Sea. This island served a vital role in maritime trade, and it is known for its dangerous storms that put ships in danger. You can easily imagine the mythological sirens coming out to sing during the windless part of the day in the black coves filled with emerald green water. It is so tiny that you can walk around it in forty minutes or so, and its geological history is layered visibly on the side. The island is populated by fewer than a thousand people, and many of them are related to me. I was so inspired by the exploration of shipwrecks there that I started a jewelry company, Treasure of the Sirens, based on the amphora found on the floor of the sea.

This tiny island has a rich mythological and global history. At one point, the Bourbon French kings who ruled Naples exiled criminals and prostitutes to Ventotene, providing them with tools to work the land, to see whether the contact with nature would lead to “moral recuperation.” I think we can all guess how that experiment turned out. These exiles were not the island's last.

There are a couple of things about this place that are relevant to the panopticon and tech giant discussion. One is that the Roman emperors, including Mark Zuckerberg's idol Augustus Caesar, sent their daughters, wives and sometimes mothers into exile on Ventotene precisely because it was so desolate. Augustus Caesar sent his only biological child, Julia, to Ventotene, and took her two sons to raise for his own. This is particularly troubling since Zuckerberg even named his own daughter after the emperor.

But there's another detail in the piece that is highly relevant to Ventotene, and that is that off the coast of Ventotene there's another, even smaller hunk of rock, and on it is a panopticon prison, Santo Stefano, where the twentieth century's political exiles were held. I have visited this prison. There's a sign on the edge of the rock that reads: Here ends the justice of man and begins the justice of God. Guards threw prisoners over this sign to the sea.

These days, the prison is abandoned. But hell, it turns out, may just well be shaped like a panopticon. The prison was inspired by Dante's Inferno and English philosopher Jeremy Bentham's (1748-1832) ideas about surveillance for total and continuous visual control of the prisoners. The idea was that the guard in the center of the horseshoe shaped jail could reach the "domination of the mind upon another mind," just like in Bentham's 1787 Panopticon. Corporal punishment took place in the courtyard for the prisoners to see. It was all very banal, as evil can be, with folders and bureaucracy and offices and all that.

At the entrance there's a warning sentence in Latin: "Donec sancta Themis scelerum tot monstra catenis victa tenet, stat res, stat tibi tuta domus" meaning: as long as the blessed Themis (a personification of justice for the ancient Greeks) will keep so many monsters shackled, the State and your house will be in safety. It doesn't roll off the tongue as easily as "Build the wall, crime will fall," but it's the same idea.

By the 1920's the prison held opponents of the Fascists. Two such prisoners, Altiero Spinelli and Ernesto Rossi, managed to write The Ventotene Manifesto there in secret. It was this document, outlining a path for social reform, that launched the idea of a united Europe and which would become reality some 70 years later. The Manifesto begins:

Modern civilisation has based its specific foundation on the principle of liberty which states that man is not a mere instrument to be used by others but rather a main autonomous living being. Looking back at this definition all those aspects of social life that were not respectful of this principle have been placed on trial, in a great historical process.

When I visited Ventotene, I took my marked copy of this important work with me. This highlighted passage contains the critical idea:

"The dividing line between progressive and reactionary parties no longer follows the formal line of greater or lesser democracy, or of more or less socialism to be instituted; rather the division falls along the line, very new and substantial, that separates the party members into two groups. The first is made up of those who conceive the essential purpose and goal of struggle as the ancient one, that is, the conquest of national political power – and who, although involuntarily, play into the hands of reactionary forces, letting the incandescent lava of popular passions set in the old moulds, and thus allowing old absurdities to arise once again. The second are those who see the creation of a solid international State as the main purpose; they will direct popular forces toward this goal, and, having won national power, will use it first and foremost as an instrument for achieving international unity."

It is almost impossible to overstate the sheer beauty and devastating isolation of this island of exiles, and the magnitude of being able to overcome the panopticon designed to create paranoia and terror in the prisoners being watched there. The Ventotene Manifesto was written in these conditions, smuggled out into Nazi occupied Europe and used, 70 years later, as the basis for unifying a continent now on the precipice of fracturing under pressure, in large part, from many of the same cyclical forces that have manifested for centuries. It was a crisis of modern civilization that catalyzed this effort. Here we are, again.