Are You the Invisible Fish on Your Team? 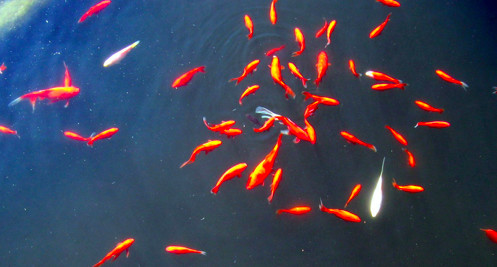 The neuroscience of cooperation: We talk with researcher Dr. Elad Schneidman on improving how organizations collaborate.

As science learns more about how neurons behave in the brain, shocking similarities are being uncovered that reveal insights into how animals and people work together in organizations.

The Power of Groups

A couple of neurons right next to each other don't seem to be working together. They are each doing their own thing.

“It’s wonderful because there’s a lot going on,” said Dr. Elad Schneidman of the Weizmann Institute for Science during a presentation on the design principles of neurons, thoughts and brains. “It’s very efficient.”

Even when two or three neurons appear to be working on their own, a much larger group of them works in tandem. They are each doing a part of the overall work.

Is it really reasonable to apply the behavior of individual neurons to complex organisms like mice, fish or even people?

Dr. Schneidman showed his research, using all kinds of sensors, glow-in-the-dark paint and predictive analytics, to model behavior in groups of organisms so we could see how they behave together and make decisions. To do this, he would make a single fish invisible and look at the fish around it. Fish do computations to figure out how to behave. His predictions for the behavior of an individual invisible fish matched the reality almost exactly.

“This is the math of neurons and social behavior,” Dr. Schneidman said. Turns out, organisms are extremely predictable, once you understand the rules of how they behave.

This could be viewed as a depressing piece of information. If organisms are so predictable, what does that say about us? Surely humans are too complex to behave so predictably, right? Wrong. But it doesn’t mean we’re doomed to keep repeating the same patterns.

So, what happens when a change is introduced?

The group changes as a result. The new patterns become predictable over time, but they are new, and they can be changed again. And again and again.

Two things govern the way groups work together: the level of ability of each individual, and the way they interact.

“Even smart people in a bad organization can lose the value of their abilities,” said Dr. Schneidman.

Communicate Even the Most Complex Ideas Simply

When Dr. Scheidman was a kid, his biology teacher kicked him out of class. He became a physicist. Biology is about thick books, he said, while physics is about finding the simplest ways to explain even the most complicated things.

“Four laws is too many,” Schneidman said. “Physicists want one. That’s the level of reductionism we want.”

Atwe love to learn about science from every angle to find ways to apply it to business processes and people. Most of the work we do is with leadership teams at global companies that are in the midst of massive transformations.

At the heart of this shift is the need for business and technology to speak the same language, or they can’t move fast enough to compete. I frequently hear software architects, for example, expressing their belief that it’s impossible to communicate the complexity of what they do simply. If physicists can do it, so can you.

“You can take out neurons and replace what we know about them with pixels or people,” Dr. Schneidman said. “It’s all similar. It’s about large groups working together.”

Cut the unnecessarily complicated words, jargon and slides with three point font filled with charts and mind-numbing details that only a handful of people need. Instead, focus on illustrating the art of the possible in a clear and direct way. This requires an understanding of the business your company is in, not just the technology that enables it.

Focus on Small Pieces, Not On Everything At Once

In order to make sense of a complex world full of sensory data, our brains look for patterns. We don’t take everything in at once, Dr. Schneidman said. Instead, we deal with “small pieces of time.”

This immediately made me think of the shift waterfall to agile. Many companies think of this as a change in the way software is created, but that’s only one small part of the transformation. If you work for an enterprise that is making the shift from end-to-end projects (often with poorly estimated budgets and timelines) to continuous, iterative development, you’ll know how painful it can be for a massive enterprise to deal with time in smaller blocks. The discussion about waterfall and agile is a much bigger topic, beyond the scope of this post. The important idea here is how time is handled differently in each framework.

When you switch to working in smaller blocks of time, people need to understand how their work connects to the strategic mission of the organization.

Leadership teams are often so focused on crushing market pressure, shifting customer demands, nimble competition and the need to clear out the spaghetti code and outdated systems that they overlook the importance of modernizing every function of the organization, from HR and legal to finance. Everybody should be iterating all the time, committed to continuous improvement. Focusing on smaller blocks of time can enable that, if the mission is clearly and vividly communicated along the way.

No Such Thing as Too Much Collaboration

Like our brains, groups are faced with the need to solve increasingly complex problems. It’s hard to do this in a silo. At the core of the culture of the Weizmann Institute for Science is an interdisciplinary approach to problem solving that is lacking in many large companies.

To do his research, Dr. Schneidman “stole language” from physics, engineering, computer science and biology.

“That’s where the frontier really is,” he said. “Especially when you’re looking at the collective, not just the individual. Science has given us so much, including new understanding of the fundamental rules of the collective.”

Instead of designing a responsive organization, which we work with our clients to do, a lot of companies invest heavily in programs to train individuals to take responsibility for issues that are really fundamental to the way the organization itself is designed. Group behavior changes come from incentives and disincentives. If you want something, you work for it. If you want to avoid something, you work to avoid it.

Science gives us a new way to understand the fundamental rules of the collective to enable the creation of robust, resilient networks. People try to solve problems when they see other people trying. Change can be introduced to a group, and the group will, predictably, change.